Generic constraints between inputs and outputs of a unit

Current equations q_outputRatioFixed and q_outputRatioConstrained allow to constraint two outputs (e.g. CHP unit). However, the formulation is not generic - it's not possible to add third output or to mix with inputs. Also, there are no constants that could be applied.

How to do this: Any number of units v_gen can be added to a constraint. Each of them has a co-efficient. In the simple case the co-efficients fix the relation between outputs.

One should also be able to use greater than or less than constraints. And they should include possibility for a constant.

In addition we need to consider reserves. For units that have fixed ratio between two outputs, reserve implies that the non-electrical output has to change if the unit will provide reserve. The user implicitly allows this when setting a reserve for such units. In the case of units with non-equality constraint, then there is an area where the unit is allowed to operate. In principle reserve can be offered up to the highest electrical output in this area - however, other outputs might need to change to get there. Another alternative is to say that the unit can only change the electrical output when providing reserves, which gives a more restricted operating range for the reserve. In principle both are valid forms of operation, but it can be bit complicated to understand (in picture below, the unit has a bit complicated operating area where red shows the reserve potential if not allowed to change heat output and green shows the reserve potential if allowed). 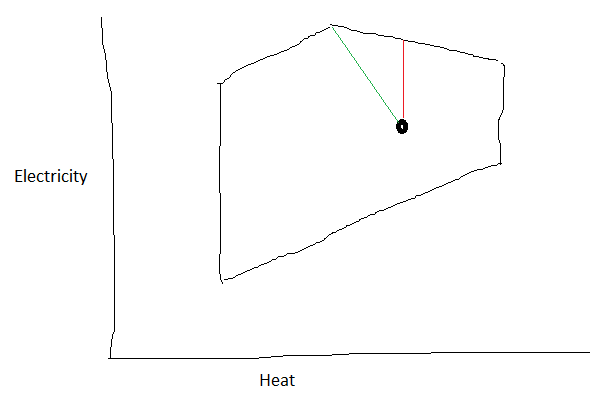 A note about the current situation: We have 'conversionFactor' and 'cV' which both are kind of doing the same thing, but neither does it properly.

This system is mainly used for VTT projects and partners in those projects. Default permission does not allow user to create projects / groups. If you are VTT person, please contact Kimmo Ahola for getting permissions.